There is no shortage of candidates from which to choose in this game that anyone can play. There are the most–wanted criminals, Professor Moriarity, Fu Manchu, Ernst Stavro Blofeld. There are the creeps that make you cringe, Uriah Heep, Dr Frankenstein, Freddie Kruger. And there are the felons of the future, Darth Vader, The Klingons, and Cyberdyne Corporation’s T1000 Terminator. Then there are real life villains who have been transformed through the lens of fiction into mythical characters:  Jesse James, Jack the Ripper, Al Capone.

Given such a bewildering abundance of criminality and social deviance, it might seem an impossible task to differentiate and classify them, let alone pick a winner. But I believe there is one quality that they all have and on which they can be judged.

It is the question of their motives in taking up villainy as a profession and, more importantly, how much do they have right on their side? How would they plead in court if brought to justice? Could a decent attorney get them off?

At one end of the criminal spectrum, we have a villain like Robin Hood. Most people would agree that Robin is a much maligned character, more sinned against than sinning. The same goes for William Tell, though both were considered criminals by the authorities whose laws they transgressed and under whose jurisdiction they robbed the rich. Most agree that – on the evidence presented in their myths – both had right on their side and this right excused all charges of criminality – as long they didn’t indulge in any gratuitous violence. Because these are basically honest men who have been traduced, I do not think they can be considered in this contest.  Fairness and justice demands that villains are people who are acting badly from motives of their own – not because they have been forced into a life of crime.

At the other end of the scale is Mr Hyde (Dr Jekyll’s alter ego) who commits mayhem and murder for the pleasure of it, and Blofeld, who advertises himself as being in the business of terrorism, extortion and revenge and who alternates between blackmailing the world and trying to destroy it for money. Neither man can clothe himself in even a shred of justification for their actions – they haven’t a leg to stand on, legally.

Between these opposing poles of justice, villains have more – or less – right on their side, more – or less – justification for the things they do, and a more – or less – convincing case that they could make if given a fair hearing. Darth Vader is acting on instructions from the Emperor – he is merely carrying out his orders as a loyal servant of the Empire. The ‘Dark Side’, his lawyer would argue, is merely a label pined on him by his enemies, the smug, self–styled ‘rebels’. The Terminator is only trying to make a better life for his fellow AI machines by stopping the constant attacks on them by humans.  Victor Frankenstein and Dr Henry Jekyll were trying to advance the cause of scientific medicine but were starved of resources and as a result  acted without due care and attention.

Taking this as our yardstick, is there any fictional villain who stands out above all others as committing the worst crimes yet having a convincing case for his actions?  Readers will have guessed already that I believe there is and I wish to make a case for him here. I offer you, the jury, the case of Rufus Ryker.

Most people will not have heard of Ryker, because he has only a relatively small part in the 1953 film “Shane”. Those who have seen the film are much more likely to remember Wilson, the pitiless gunslinger who guns down Elisha Cook Jnr., and smiles as his victim falls face down into the mud.

Wilson gets a full 10 marks for ruthlessness, willingness to kill, and cruelty. He gets an additional 10 for dressing in black, wearing a black hat and smiling as he kills. However, though brilliantly portrayed by that much under–appreciated actor Jack Palance , Wilson gets nil pointes on the Milton scale of motivation because, quite simply, he is a hired gun: he is paid to kill.

But the man who hires him, cattle rancher Rufus Ryker, played by Emile Meyer, scores a full 10 for motivation and is – in my book – almost on a par with Robin Hood. The reason is because of the brilliant screenplay of the film and the role it assigns to Ryker. And this in turn is the result of a partnership between two great American writers, Jack Schaefer and A.B. “Bud” Guthrie Jnr.

Many of Hollywood’s great western stars, including John Wayne and Burt Lancaster, queued up to make Shane, sensing that the story had an almost mythic quality that raised it far above the run of the mill western. It is this mythic quality that Ryker embodies. When the film as we know it was finally made in 1953, it starred Alan Ladd as Shane, Van Heflin as Joe Starret and Jean Arthur as Marian Starret.

In case there is anyone alive who doesn’t know the story, Shane tells of the mysterious gunslinger of the title who is trying to leave behind his bloody trade and settle down somewhere honest. On his journey he comes across farmsteader Joe Starret and his attractive wife and son, little Joey, hacking a hard life out of their small claim in the remote wilderness. But Starret and the other homesteaders have staked claims on the previously open range which cattle baron Ryker considers his territory. Ryker tries to buy off or frighten off the homesteaders – with some success. But Starret is stubborn and when Shane throws in his lot with the Starrets, the balance tips against Ryker and his men. Ryker sends for Wilson the gunslinger to frighten the homesteaders away and – if necessary – kill them.

Before letting Wilson off the leash, Ryker and his men ride out to the Starret homestead and he tries one last time to appeal to reason with Starret, telling him to name any reasonable price for his land, offering Starret a well–paid job, and offering to let him run his own herd of cattle alongside Ryker’s.  All of this Starret refuses.  It is at this point in the film that Ryker gives his reasons for acting as he does.

For this epic scene, director George Stevens places his camera at ground level, looking up at Ryker, ageing now but still tall in the saddle and proud, framed against the wide open western sky. He looks almost like a bronze statue erected to the memory of the men who opened up the west and, indeed, Ryker is one of those mythical men, the heroes who tamed the land. It is from this heroic position on the pedestal of history that Ryker make his final offer to Starret.

“Set a price you think is reasonable, you’ll find me reasonable. Is that fair?”

Starret rejects this. “You’ve made things hard for us, and we’re in the right.”

This is the one thing that is guaranteed to enrage Ryker. 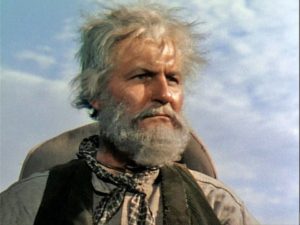 “Right? You in the right?  When I came to this country, you weren’t much older than your boy. We had rough times. Me and other men that are mostly dead now. I got a bad shoulder yet from a Cheyenne arrowhead. We made this country, we found it and we made it, with blood and empty bellies. Cattle we brought in were hazed off by Indians and rustlers. They don’t bother you much any more because we handled ’em. We made a safe range out of this. Some of us died doing it, but we made it. Then people move in who never had to raw-hide it through the old days. They fence off my range and fence me off from water. Some of them plough ditches, take out irrigation water. So the creek runs dry sometimes and I gotta move my stock because of it. And you say we have no right to the range. The men that did the work and ran the risks have no rights?”

Now, Shane is the hero of this story. He’s handsome – Mrs Starret thinks so – and little Joey hero worships him. He’s played by good–looking Alan Ladd, so we know he must be on the right side and Ryker on the wrong. The film’s subtext tells us so.

But hold on a moment. Ryker is right. He and his peers did all the hard work. They made the place safe from rustlers and Indians. They took all the risks. And now Starret has got a gunslinger – Shane –  on his side. Isn’t Ryker entitled to have a gunslinger on his side, too? He’s made what sounds like a fair offer, hasn’t he? Just imagine what Darth Vader would do in this situation, or  Al Capone, or Jack The Ripper. They wouldn’t offer the hero a well–paid job – they’d reach for their light sabre, or Thomson machine gun, or surgeon’s dissecting room knife.

Who is to act as judge in this moral dilemma? In this question we see Hollywood at its best, story telling at its most effective and producer–director George Stevens at his most brilliant. Stevens, and the writers whose work he brings to life, know that to create true drama in a western of this kind, the villain must have just as good a case as the hero. He must believe in that cause just as strongly as the hero believes in his and he must be prepared to go to any lengths to defend that cause. It is this willingness to give the bad guy full value to his argument that gives Shane its mythic or epic quality. The result is a film that tells a truth. Maybe not the whole, factual truth, but a truth about its central conflict.

I’m glad that Shane helped the Starrets keep their little bit of land. And maybe it was time for Ryker and the old gang to hang up their guns and make room for others to share the range. I suppose it all worked out all right in the end. But I have to say that when I hear Ryker speak his piece, the hairs stand up on the back of my neck  and I can’t help thinking that if this case ever came to court it would not be quite as cut and dried as it in on screen. And it wouldn’t just be Shane riding off into the sunset. Rufus Ryker would be riding right beside him.

P.S. For a real treat, listen to Victor Young’s brilliant film music for Shane here. It’s titled, “The call of the faraway hills”.

Three essential ingredients of a story

Was Nietzsche a Nazi?

Does music get recycled in films?

Read my most recent blog posts

The Wisdom of Crowds

What makes a novel good?

How to tell bad companies

A Crisis of Identity

Welcome to my Bookshelf

This site is an attempt to put all my books and short stories - existing and planned - under one roof, together with blog posts, book reviews and film reviews.

“A writer is someone for whom writing is more difficult than it is for other people.”