In early 1917, the First World War had reached a crisis. Both sides were exhausted. Millions of men had been killed without any decisive results. The efforts of the Allies to mount the great breakthrough on the Western front at the Somme in 1916 had failed. Without fresh blood, the stalemate would continue with no end in sight unless one side or the other ran completely out of money, men and materiel, and capitulated.

The United States, under President Woodrow Wilson, continued to maintain its neutrality despite the grossest provocations. When American ships were sunk, and American lives lost, Wilson turned the other cheek and continued to press for a negotiated settlement – a “peace without victors”.

The Germans decided to stake everything on one last throw of the dice – unrestricted submarine warfare. The Kriegsmarine had experimented with this form of war in 1915, when it had sunk the passenger liner Lusitania with the loss of nearly 1,200 lives, including 128 Americans. But the German government called a halt in response to the storm of criticism this level of savagery provoked internationally.

Unrestricted submarine warfare means sinking on sight, without warning, any vessel that enters a zone of exclusion. It was, and is, seen as barbaric in the extreme to condemn passengers, including innocent civilians – men, women and children – to almost certain death, without any warning or chance to take to the lifeboats.

But as well as sensitivity to public opinion, the German government had another reason for calling a halt to its experiment. In 1915, the German navy possessed too few submarines  – only 25 –  to make any decisive impact on the millions of tons of food, raw materials and supplies that arrived every week at British ports. Although calling off its campaign, the Kriegsmarine secretly put in hand a crash programme of submarine building. By the end of 1916 The U-boat pens at Bruges contained more than 100 vessels  – a secret weapon, waiting to be unleashed on transatlantic trade routes.

What had seemed impolitic and impractical in 1915 now seemed eminently feasible in 1917. The Kriegsmarine’s admiral von Holtzendorff  calculated with Germanic precision that his new U-Boat fleet could –if set loose – sink 600,000 tons of Allied shipping each month. At this rate, within six months, Britain would be starving and would have no feasible alternative than to negotiate peace terms. Germany would be victorious and would remain on her new-won borders.

Britain had no way of responding militarily to the U-Boat weapon, except to try to impose some form of food rationing and this, said the Germans, the British government would find impossible to implement and to enforce. There would be rioting in the street as the people starved, compelling their government to surrender. The Germans were not alone in this assessment. The Royal Navy’s Admiral David Beatty also concluded that, “The real crux lies in whether we blockade the enemy to his knees, or whether he does the same to us.”

There was one small flaw in the Kriegsmarine plan – the United States. Unrestricted submarine warfare might well jolt President Wilson and isolationist America out of their neutrality. But – and here was the beauty of the German plan – even if the worst happened and the United States came in on the Allied side, there was nothing effective the US could do in only six months. It was impossible to recruit, train and equip an army of any size and transport it to Europe, in such a short time.  Von Holtzendorff went so far as to promise the Kaiser that, even if the “disorganized and undisciplined” Americans did intervene , “I give your Majesty my word as an officer, that not one American will land on the Continent.”

But just to make sure that the U.S. government continued to ignore the war in Europe, the German foreign office devised a plan to focus President Wilson’s attention firmly on the home front. They secretly promised the Mexican government that, in the event of war between Germany and United States, they would provide money, arms and men to enable the Mexican army to invade the US and take back the rich lands it had lost – Texas, Arizona and  New Mexico.

A German-backed Mexican invasion of the southern U.S. would keep America far too busy to think about pulling Britain’s chestnuts out of the fire. The German Foreign Minister, Arthur Zimmerman, made this proposal by secret telegram to Mexico’s President Carranza in January 1917.

The planned campaign of unrestricted submarine warfare was finalised in detail by the German war council the same month. The Kaiser, his generals, and most senior politicians (though not the Chancellor, Bethmann- Hollweg) agreed, it was Germany’s best hope of winning. Unrestricted U-boat warfare would be commenced, with less than 24 hours warning, on 1st February 1917.

In Room 40 of the Admiralty in Whitehall, the head of Britain’s fledgling cryptography organisation, Admiral Reginald Hall, held in his hands the most explosive document of the First World War. It was an intercept of the coded telegram that the German foreign office had sent to its ambassador in Mexico detailing proposals to be made to Mexican President Carranza.

The document had come into British hands in January 1917, only days before the impending U-boat campaign was due to start, and spelt out in unambiguous detail exactly what Germany planned to do if the United States declared war as a result of the submarine campaign.

Zimmerman’s cable read, “We intend to begin on the first of February unrestricted submarine warfare. We shall endeavor in spite of this to keep the United States of America neutral. In the event of this not succeeding, we make Mexico a proposal of alliance on the following basis: make war together, make peace together, generous financial support and an understanding on our part that Mexico is to reconquer the lost territory in Texas, New Mexico, and Arizona.”

As if that wasn’t enough, Zimmerman went on to propose that Mexico also invite Japan to join in this alliance with the aim of attacking America’s West Coast.

Hall had in his office safe the means to force Wilson’s hand and bring the United States into the war on the Allied side. But he hesitated over playing his trump card for two reasons. First it was essential not to give away the secret that Britain could read German ciphers by finding a plausible cover story. Second, Hall would have to find a way of convincing the Americans that the telegram was not a British forgery.

He solved the first problem by getting a British agent known only as “H” (probably the British ambassador to Mexico,  Thomas Hohler) to bribe an employee of Western Union (over whose commercial telegraph wires the message passed on its journey) to steal the encrypted version of the telegram.

Hall then set about solving his second problem. On 19 February, he showed the telegram to Edward Bell, secretary of the U. S. Embassy in Britain. Bell thought at first the document must be a forgery but Hall convinced him by disclosing to him Britain’s cryptographic capability, swearing him to secrecy. Once Bell was convinced the message was genuine, he encouraged Hall to send it to United States ambassador Walter Hines Page. On 23 February, Page met British Foreign Minister Arthur Balfour and was given the ciphertext, the message in German, and the English translation. Page reported the story to President Wilson, including details that could be verified from Western Union files in the United States. 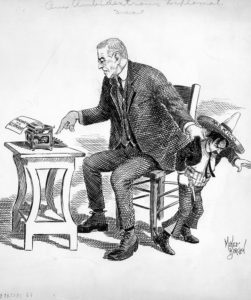 Wilson released the text to the press on 28 February 1917 sparking a worldwide storm of sensation. At this stage the Germans could still have pulled back from the brink by the simple expedient of officially denying the telegram and declaring it to be a British forgery. But Zimmerman ended all possibility of deniability by admitting to an American journalist “I cannot deny it. It is true.” He later made a speech in the Reichstag when he again admitted the telegram was genuine.

On 3 February 1917, Wilson finally broke off diplomatic relations with Berlin. And in April, declared war on Germany.

The results of the unrestricted U-boat campaign were initially every bit as disastrous as expected. The number of sinkings tell the story. In January, before the campaign, 49 cargo vessels were sunk. In February, 105, in March, 147 – representing one quarter of the ships sailing to British ports.

The Royal Navy was pressed for an answer but the admiralty hesitated. People wanted armed escort  vessels to be sent with every ship, but there simply were not that number of naval vessels available. People wanted cargo ships to be pooled together and travel in convoys. Here, the Admiralty was even more resistant. They argued that travelling in convoys would create bigger, more attractive targets, and if a convoy was found, the U-Boats would sink all of them – including their naval escorts.

Eventually these fears were overcome and convoys proved successful. A convoy of even a hundred vessels, steaming at the speed of the slowest vessel, proved just as difficult for U-Boats to find as a single ship in the vast reaches of the Atlantic.

In practice, the U-Boats turned out not to be the finely-honed secret weapon that Germany boasted of and Britain feared. The process of loading new torpedoes into the tubes was so cumbersome and time consuming that, in practice, a U-Boat could only fire the torpedoes that were already loaded before fleeing.

The Admiralty finally agreed to try transatlantic convoys and the first sailed in early May. The following month a regular convoy system was started and from then on losses never went as high as 500,000 tons per month, although they did stay above 300,000 for the rest of the year.

The German calculation that American could not react quickly was proved correct. But their aim to finish the war off in six months failed. In the end, some two million Americans fought in Europe and were decisive in defeating Germany.

The German High Command had committed the blunder that every military or business student learns to avoid at all costs: when you’re running the show, don’t bet the farm.

*My thanks to Peter Weil for the cartoon on President Wilson

The myth of the Brexit “Cliff Edge”

Read my most recent blog posts

The Wisdom of Crowds

What makes a novel good?

How to tell bad companies

A Crisis of Identity

Welcome to my Bookshelf

This site is an attempt to put all my books and short stories - existing and planned - under one roof, together with blog posts, book reviews and film reviews.

“A writer is someone for whom writing is more difficult than it is for other people.”